Its time for pongal again!!

Wishing you all a happy pongal/sankranthi. This was the first time I was celebrating Pongal all by myself. As always, the net came to my rescue for the recipes. And they did come out pretty well.
The alarm went off at 7 AM. I kept snoozing it and finally got up with a start at about 8.15. I rushed to have a quick bath. I had to make the pongal before 9 and I'm pretty slow, so it would was going to be a mad run! I decorated the cooker (its actually supposed to be a "pongal paanai" but i dont have any ;)) with the coconut, turmeric pieces, banana and sugarcane. The milk started boiling. Meanwhile I couldn't wait. So I thought "Why not do a kolam on this auspicious occasion". So I went armed with the rice powder. And this was the net effect of the exercise!! 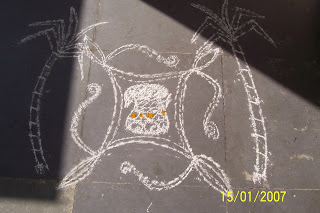 By this time the milk had boiled, I put the rice-dhal mixture that I had washed and kept aside in the milk. After this would boil well, I would add jaggery and spices and "Sakkarai Pongal" would be ready.
While the sweet pongal was getting ready, I started the preparation for the "Venn Pongal", coconut chutney and sambar. I selected the best looking recipe among all the ones from internet and went ahead with the preparation. It took about an hour and a half to get done with everything. However, finally the dish looked awesome and so tempting!! Want to have a look? Here it goes!! 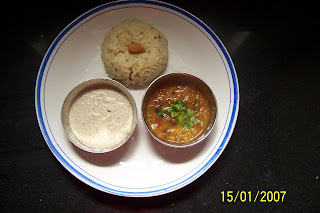 Happy with my creations, I went on to have a happy breakfast. By this time, Mukund joined me from his deep slumber. I was cent percent sure that my pongal was really good, as Mukund (who usually hates the sight of rice!) took two-three servings of the pongal :D
See you all then. Time for me to go for my dinner!
Posted by Janani Vasu at 6:25 AM 5 comments:

Anything but a software engineer!!

The blog title should explain it all. Today is one of those days when I think why did I become a software engineer. (I should admit that there are days when I think 'Thank God, I'm a software engineer').
It's a nice relaxing Saturday and here I am working on my office stuff, the muted TV in front of me. The code is one of those frustrating, seemingly easy, taking the life out of you with the problems it reveals, where none of your 100 solutions work!!

So I thought, I'll take my eyes off the taunting code editor for sometime and blog something. (Of course, there is a parallel thought process at the back of mind thinking about a 101th solution to the problem)
For this post, I thought I will blog all those so-called "ambitions" that I had when I was a kid!! Hmm...so let me start thinking.

1) A singer - There have been many times when a rolled up magazine wouldbecome my mic and I would sing away to glory. Not only that, I would serve as the host too who would introduce "The singer Janani". All until my mom would shout at me to shut up and study!

2) Social worker - There have been innumerable occasions when a group of young children on the streets of the town where I grew, Salem, would bring this thought into me -"When I grow up I would run an organisation to provide these children food,education and health. And I would come again here and take them with me to that place".

3) An engineer - No...not a software engineer! I would see the bright yellow helmet that my dad used to wear during his shopfloor supervisions and would think - "Wow! that looks cool. I should become like him when I grow up!"

4) Doctor - Don't ask me why I wanted to become one! I wouldn't have even managed to cross past half of it with my patience levels!! I used to be fascinated by the stethoscope.

5) Cook - This was purely triggered by the recipes that I used to read in the children's magazine "Gokulam". It used to be the same recipes again and again - Crumbled biscuit pudding (I still remember my brother spitting out the pudding I made!!), Bread balls and so one.

6) Hair stylist/Beautician - This was one of those wishes that lasted for a very long time! I used to style my mom's hair during her afternoon naps. My brother too became the victim of my skill once. I promised him a step cut and at the end his hair was shaved out in patches. He was shocked and cried out loud. But you know what he was blamed for having shown his head to me.

Thats pretty much the list. Can't think of anything more. Time to sign off. My code is beckoning to me and I am going to move to it reluctantly, thinking why I couldn't have become one of the above!!
Posted by Janani Vasu at 7:13 AM 1 comment:

Back to work after a long weekend!
I got this mail from a colleague about the Chilkur temple getting a mention in the Wall Street Journal. The link is here for you to read and enjoy too.

I heard about the Chilkur temple three years ago when I moved to Hyderabad. There were talks about the temple helping you to get through your visa interviews smoothly.

My first visit to the temple was on Durga puja day with my friends. Of course, after that I've been visiting it for 4-5 times now, mostly accompanying people who visit me to the temple.

On my first visit to the temple, I was really dumbstruck by the huge wave of people trying to make their way around the temple with a small piece of paper and a pen in hand. It was a totally different sight from what you get to see in other south indian temples. Curious to know what was in the paper, I peeped and got a glance of one of them. Any guesses? It was a piece of paper with numbers 1 to 108 printed on it in a grid. People were striking off the numbers one by one as and when they finish one round around the temple or a parikrama as they call it. It was an easier way to keep count of the 108 parikramas that they had to do. As much as it was amusing, I was impressed by the simple solution that the temple priests had provided for a problem much more simpler.
Another thing which I feel is good about this temple is that they do not accept any money as offerings. However, if you want to contribute in some way, you are welcome to offer your services at the temple for the short time you are there - like distributing flowers to the devotees, selling the books at the counter etc. If you want to contribute money, then you can buy the books that the temple trust publishes. They are published in English/Telugu and cost Rs.5 each. The temple encourages you to buy them and distribute it to spread the fame of the temple.
Some kind of temple reforms!!
Posted by Janani Vasu at 10:33 PM 227 comments:

Its been a long long time...Its sad to think I couldn't take out time to blog of late. Anyways, let's see if I can atleast do it this year! Let me not make it a new year resolution because they are made to be broken.

Let me take this post as an opportunity to wish all of you a very happy and prosperous new year. Let the new year bring with lots of joy and happiness.

Hmm...and its time for a new, more matured look for my blog :)
Posted by Janani Vasu at 3:32 AM No comments: