The last two weeks in Redmond was pretty good for me...I learnt something new. Ironically, this matched with the new year resolution for me on the gift scratch card that I got in Subway :-) It was "Learn something new this year" and I'm happy I fulfilled it too early in the year ;-) Anyway,this doesnt mean I won't learn anything more this year, just that the learning spirit has been instilled in me with full vigor...[hope my manager reads this ;-)]
Want to know what I learnt? I learnt to ski :-).....I never thought I would ever enjoy some sport at all, me being the lazy kind of person. The main driving factors were the wide expanse of soft white snow in front of me and the feeling that I will never get to try this once I'm back to India. I joined Chetan and his friends, Prasanna and Jigar to the Crystal mountain skiing resort.
I opted for the 3- day lesson scheme which amounted to 125$. My first day lesson was on Jan 7th. The drive was also a really enjoyable one. The road was lined up with tall and dense pine trees towering up to great heights and blocking the rays of the sun. At a particular point it looked like we were going through a tunnel...see below for yourself... 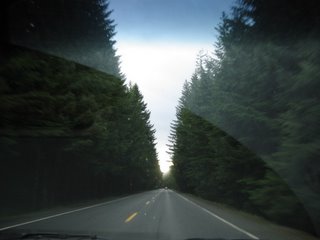 The second day we also stopped in the middle to chain the tyres. The landscape was totally white draped in snow and it was snowing lightly. It was wonderful.

Once we reached there, we got ourselves registered and proceeded to the first time skiers zone. There we met our trainer for that day - Nicole. She was a sweet friendly person and I was really astonished when she remembered me by name the next week because she sees so many people everyday :-) Maybe she remembered me as the most difficult student to teach :-D Teachers usually remember slow learners ;-)

There were about 6 people in my group and the first lesson was to teach how to wear the skis. The shoes were damn heavy...about 8-9 kgs and they were almost biting my toes. And wearing the skis was a bigger problem than I had thought it to be :-) I kept falling down the slope and really had a difficult time...Then started the lessons on how to ski. I was told to make an 'A' wih my skiis. This shape was supposed to reduce the speed of skiing and so for the first timers this was to be maintained throughout. My shoes were a bit oversize and it was making it even more difficult to push the skiis apart. I could not count the number of times that I fell down that day :-(. After a lunch of veg pizza, we again went to the ski grounds. I was determined to ski atleast once without falling before leaving that day :-p. We realised that there was no class for the afternoon session. So we proceeded to the lowest slope - 'The Discovery'. Getting on into the wench was a nightmare, the wench kept moving and we had to get on to it at the right time. But once on it, the journey to the top sitting on it was fun :-) The slope was 4580 feet tall. Again, getting off the wench was really tough and I kept falling down :-( I was almost beginning to think this was not for me, when Chetan agreed to coach me. I should say he was a really good teacher and by the end of the day I was able to make 2 zero-fall skiing attempts down the slope :-D

The second day, I got longer skiis and getting up was even more difficult.During the lesson, we were taught how to turn. We had an exercise after that - the trainer fixed poles at about an yard's distance from each other in a straight line. We had to go through them without knocking out the poles. I was the last to go through. I went through the poles without knocking them off but I was skiing sideways. Until people told me after I reached down I never realised it looked so funny :-( After the lessons, I didnt want to venture bigger slopes with the others and stuck to the 'Discovery'. However I enjoyed it much more as I didnt have many falls. It was a much more colder day and was snowing throughout. I was enjoying every moment of the snow fall. I met a girl from Florida on the lift up to the slope. When I told her I was from India, she asked me "Oh! So you would have seen live elephants right?" I was surprised...why elephants of all the things in India? But then when she asked what else was famous in India, I couldnt think of anything specific :-(

At the end of the day I was really glad to remove the skiing shoes. My toes were hurting really bad. After dinner at subway and a hot water bath at home my head hit the bed. After the second day, I didnt have much pain too like the first day. For about a week after the first day I couldnt even move a muscle. But truly as a whole it was a once-in-a-lifetime experience.

Below - me in the skiing gear 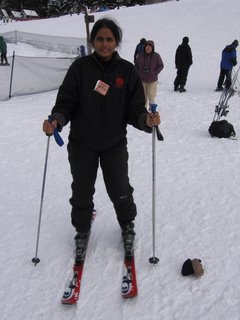 I saw a poster today in the hallway of one of the buildings here in my office. It instantly swiped me off my feet. What was depicted there was exactly what used to run in my mind often when I used to be frustrated with my work :-) I couldn't stop myself from capturing it in my camera. Here's it for you to peek into [With some editing done to trim off things which might land me into trouble :-)] 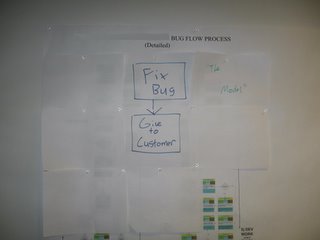 The poster had a huge block diagram depicting the flow for a particular process. It was mostly hidden by white paper on which there were just two steps to get it done...short and sweet.[I don't have any idea about the above process, maybe it needed the detail...however it just reminded me of the mundane processes that I see]

A process for every small thing...Maybe it is a necessity sometimes, but most often it complicates things than to ease them. :-)
Posted by Janani Vasu at 6:56 PM No comments:

The title is inspired by the movie I saw on New year's eve...'Sleepless in Seattle':-)

Well it was the weekend...and I had a enjoyable and tiring day, shopping. But as the night progressed, I realised it was one of those new years which I would never want to have again :-( - Alone inside a quiet apartment(of course I had the TV to my company).I thought I'll call up some people and wish them and to my horror none of the calling cards had balance :-(

Someone had asked me earlier that day about what I usually do for New year and I too had read some blogs too about the different new year experiences...This started my mind off on the long trails of thinking...about what was New year to me all these years...
I should say even though there was not much partying or celebrations in my New years, it sure was not 'yet another day'. Most of my new years were spent with my parents in Salem (It is a small town in the state on TamilNadu famous for mangoes and steel :-D)We usually had a company get-together followed by dinner, orchestra and the much-awaited fireworks. After moving to Chennai for my college, this day also meant seeing my school friends after a long time. It used to be so much fun meeting up with old friends and catching up on gossips. At the stroke of twelve we would be at my favourite local temple praying to get the new year started off peacefully.
And some of the other great times I've had during new year were at the Anna university hostel. The best thing about hostel was that I never remember a time when I had to be alone there :-D ...Those times will remain evergreen in my mind...
Well...that's past...so what did I do this year...Though not anything as much interesting I did watch a lot of movies on TV...lots of them which I've wanted to see but hadn't got a chance to - Miss Congeniality, You've got mail, Legally Blonde, Sleepless in Seattle...
And yes, I got my new camera and was exploring it...This was one of the first snaps that I took :-D

Wishing you all a very happy new year!!

A scene from my living room... 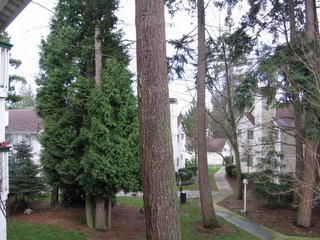 Posted by Janani Vasu at 5:27 PM No comments: